His father is the german top dressage stallion Don't Worry Junior, and his mother is, Stratiatella BL., one of the best broodmares in Germany with 10 in trot and canter. The dam's sire is Brooklands Moonwalker, who has several winnings in S-Dressage against ponies as well as against warmbloods.

Dr. Doolittle was licensed as stallion in Neumunster in 2009 together with 23 other stallions out of a group of 74 He is furthermore licenced in Hannover, Weser-Ems and Denmark

In 2009 he vas stationed at the famous Gestut Halerhohe in  Weser-Ems.

His half-brother (same dam), Charlie Chaplin is also a licensed stallion and is sold to United States

A half-sister ( same dam) She's Madonna, is St.pr.st. and was number 4 at the Bundeschampionate in 2010. Se more about She's Madonna by clicking her name in the menue.

Dr. Doolittle, himself, won the qualification for Bundeschampionate when he was 3 years old..

In his first year in breeding 14 of his offspring were awarded a prize and two of the foals were nominated for the foal championship in Lienen.

In september 2011 he has made his license test and he was winner of the dressage-part.

You can se the result form his license test here

In the breeding season 2012 he is in Germany for participating in dressage competitions.

Therefore its not likely that he will serve as a breeding stallion, but we hope that we later this season can offer you frozen semen 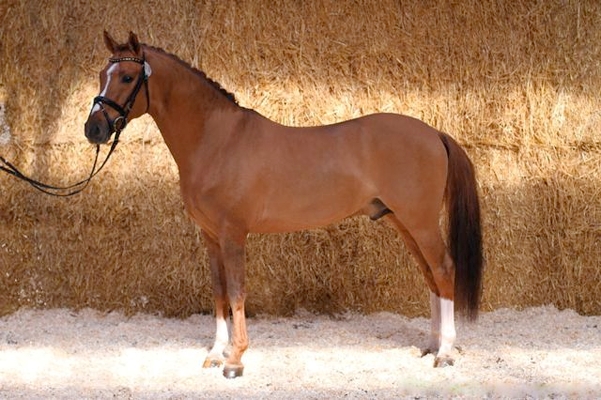