AT THE 12TH OF OCTOBER DRESSAGE-NEWS. COM WROTE:

OSLO, Oct. 12–Some of the top figures in European dressage joined with the Oslo Horse Show in an emotional effort to raise funds to fight breast cancer.

Edward Gal and Bettina and Paul Schockemhöle, a set of shoes from the superstar stallion Totilas and Tailormade Horses all featured at the event at the horse show on Tuesday, the culmination of actions that began in 2004.

The mother of Carina Carlsen, editor of the Norwegian dressage site, www.dressursaklart.no, was diagnosed with serious breast cancer seven years ago. Her love of horses helped to keep her going even when she felt like giving up.

In 2009, with her mother recovered, Carina contacted Elizabeth Farbrot who was in charge of dressage at the Oslo Horse Show, to propose a Pink Ribbon Show. A Prix St. Georges plus musical freestyle was included in that year's show, and Carina's mother was able to compete, qualifying for the freestyle.

The Pink Ribbon event then became part of the annual competition.

For this year, Trine Hillermann Stiansen and Tailormade Horses were able to get a set of shoes from Totilas to be auctioned at the horse show.

To promote the cause, Bettina Schockemhöle agreed to sell her horse to Trine which he re-named Tailormade Mr. Pink.

Edward Gal had been invited to the Oslo Horse Show to compete in the CDI3* and to give a clinic.

Mr. Pink being ridden by Ellen Birgitte in Edward Gal's clinic at the Oslo Horse Show

A stunned Ellen Birgitte accepted and then rode Mr. Pink for 20 minutes before Edward. Mr. Pink also has his own Facebook page, 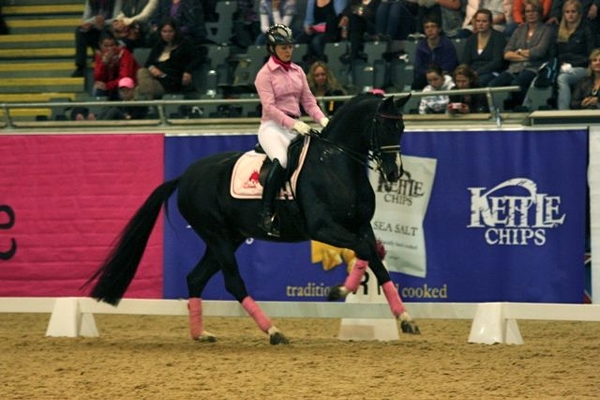